We hear a lot on the news about the predicted effects of Global Warming, with the latest UN report warning the world must cap its total temperature rise at 1.50 Centigrade. Whatever the politicians decide is the right course of action, we can all do our bit by saving electricity, cutting car journeys, or setting the thermostat on the heating lower.

However, hot summers such as we’ve experienced this year are certainly good for the drinks industry: with gin distillers doing particularly well. Which brings us to the less onerous matter of – how much ice should you have in a G&T? So I decided to ask our local expert.

Currently Bar Manager at the Cromwell’s Arms in Bovey Tracey, James Houghton has been in the pub business for over 20 years, having trained with the Hall & Woodhouse pub chain. And he has a pretty chilling opinion of what makes a good gin based drink.

“Lots of ice”, he said, “preferably you half fill a big goblet glass with three or four scoops of ice before you pour the gin, and the mixers should also come out of a chiller cabinet. Some places even keep the glasses in a fridge, you certainly don’t want them coming red hot out of the glass washer.”

James’ approach to mixing gin is simply based on the principle that having lots of ice in the glass actually slows the rate at which it melts – preventing the flavour of the spirit being unduly diluted and spoilt. The Cromwells has a fair selection of gins on offer, including traditional names like Bombay Sapphire, but I tend to choose Black Dog, distilled in Newton Abbot, for its zingy citrus flavours.

I suppose if you want to be totally environmentally friendly you wouldn’t have ice in your drinks at all because of the energy it uses. That’s why when I sit in the garden drinking a gin and Fever Tree of an evening I always look up at the PV panels on the roof to reassure myself our ice is green.

Just for reference, back in 1976 when the UK was suffering the hottest, driest summer on record, climate scientists were pretty much united in warning us that northern Europe was entering a new Ice Age, and that the country would be covered with glaciers as far south as Birmingham. They’ve changed their minds on that, but gin drinkers are never likely to start believing in “Goblet Warming”.  Cheers!

When the Gin becomes the ice …

Thank you to Lunds & Byerlys for this inspiring gin popsicle video! 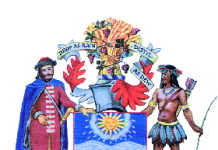