Limehouse – where the ages meet

I first saw Limehouse from the Thames, back before the millennium, on board one of the super-smooth ‘Clipper’ catamarans, as a crew member pointed out places of interest for passengers: explaining how the nondescript junction gave access to the Grand Union Canal and the industrial heartlands of England. And that in some way captures the essence of Limehouse Aromatic Gin: a spirit which reflects the confluence of different eras.

I hadn’t heard of the brand either until our friends and followers, Bill and Lesley bought me a bottle for my birthday, but have enjoyed the taste so much it’s vying for a spot in our Top Ten. The makers describe it thus: “Inspired by the colourful history of London’s East End. Limehouse is produced with care by pioneering experts”. The multi-layered flavour comes from a blend of botanicals as well as earthy tones plus “a hint of juniper and citrus”.

I’d argue that on the nose the juniper is fairly strong, mixed with spicy aromas. Sampling Limehouse along with a dash of premium tonic brings distinctive, but complementary contrasts, starting as the robust zing from the 40% strength, followed by subtle aftertastes of peel and root. It lingers nicely on the tongue well after the liquid has been quaffed; giving you plenty to ponder.

30 years ago the stretch of the river east of The City retained plenty of commercial property – the sort of backdrop beloved of The Sweeny – now replaced by modern flats. Pleasure craft, meanwhile, now potter where barges from the canals once swarmed around Docklands’ sea-going vessels. Similarly splicing times and tastes for me then, Limehouse Aromatic echoes many traditional London Dry Gins and contrasts them with some of the more adventurous distillations being crafted around the country.

“Like the great river itself, Limehouse deserves to be enjoyed more widely” 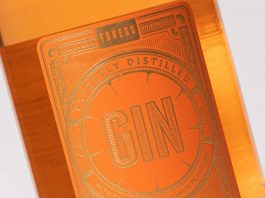