Having finally got round to sampling the Dartmoor Distillery’s Navy strength offering I have realized that the so called ‘Number of the Beast’ isn’t 666 at all, it’s 57.  Or to use the correct terminology, 57% Alcohol By Volume: thanks to successive runs through Ethyl Ethel, the custom built copper still which resides within the old Tucker’s Maltings building near Newton Abbot’s railway station.

For those not familiar with the myths and mysteries of Devon, there have been countless sightings and stories about big cats living on the moors, preying on sheep or stray pets.  And though nothing has been verified, the large cat-like creature portrayed on The Beast’s label conjures up the spectre of what many farmers and tourists claim to have seen.

It is actually my first ever taste of any Navy strength spirit, and was certainly no disappointment.  Also, as our fleet’s wardrooms were well known for serving pink gins prior to dining, I decided to try my measure with Fever-Tree Aromatic tonic, which contains angostura bark.  Ice and a slice of lemon completed the manifesto for my maiden voyage.

I should report here that the bottle’s label warns that adding tonic may turn the gin cloudy: in the manner which happens to ouzo; and not an uncommon issue.  Of course, given the pink tinge to the Fever-Tree mixer, my glass immediately took on the appearance of a Cherry B, so popular in the seventies, but the taste I believe remains unaffected.

To my senses there is a slight aroma and taste of cinnamon mingling in with the strong citrus, making the overall sensation both multi-dimensional and surprisingly smooth.  Try it neat as I always do with a new gin and the strength is unmistakable, but doesn’t leave your tongue feeling like it’s been “flogged round the fleet”.

Men ‘flogged around the fleet’ could receive up to 300 lashes, which were often fatal

So for anyone who has enjoyed Dartmoor Distillery’s Black Dog gin (see our review) I’d recommend trying the navy strength version.  Despite the cloudiness rolling in like a sea mist off the Solent, the maker’s Beast will rock you like a broadside from Nelson’s Victory.

Beast Gin can be purchased for £20 for a 35cl bottle direct from the distiller. 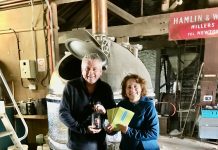